This notebook is designed to help you learn how to make apps in panel in about 15 minutes. Screenshots of cell outputs are included for convenience below, but it is strongly recommended that you use the interactive version by clicking here (takes 1-2 minutes to load) or by cloning the repo and running locally.

Building a Web App with Panel and Holoviews

Try out the app below. It's a mortgage calculator app allowing you to see your mortgage payment, amortization schedule, and principal paid over time.

Note: For the app below to work in JupyterLab, you'll need to run jupyter labextension install @pyviz/jupyterlab_pyviz in the terminal to install the needed labextension. This is not needed if running in a Jupyter notebook outside of JupyterLab. The app above was built with Python, and without directly writing any css or javascript. Panel and Holoviews are a great way for data scientist or others to build a web app. This learning aid is designed to demonstrate some common usage, and encourage you to build your own app from there.

Several sections follow below demonstrating key knowledge used to build the app above.

Panel and Holoviews are nice because they integrate well with Jupyter notebooks and Jupyterlab. You can build your app and display it interactively in Jupyterlab to speed up development. For this to work however, make sure to:

After doing so, you should be all set to prototype the app within jupyterlab.

Take a look at more examples of panes, widgets, and panels (layouts) at https://panel.holoviz.org/reference/index.html. You can also learn about what parameters each widget supports by clicking on a particular widget from there.

First, let's make a widget by running the code below.

When choosing a widget for your app, try to choose a widget made for the applicable datatype (string, float, int, set, etc.). This will greatly reduce the amount of custom input validation you'll need to do. Also notice that you can manipulate widgets in the UI or in code.

We combine a widget and some markdown panes with a Column panel in the next cell.

You'll notice the display doesn't update when a different radio button is pressed. To update we need to make a function to call when a specific widget's value is modified.

Note: Panel has four different API's. This learning aid uses the callback API, which is the lowest level of the four, and gives the most control.

Be careful about running the above cell multiple times. Doing so will attach multiple function callbacks to the radio button, and the app may not behave as expected. Restarting the kernel, and rerunning the cells will fix this.

You may be wondering why the if statement in the update function is needed. In this simple example, it's not. However, as we add more widgets I've found it's nice to have a single update function for all widgets in order to more precisely specify the order in which pane updates need to happen as well as share intermediate results computed during the update function.

The app above could serve as the start of many, many apps, but how exactly do we update plots based on widgets instead of just some text? It's pretty simple, we just replace the Markdown pane with a HoloViews pane. The panel HoloViews pane is a wrapper around Holoviews plots. Other plotting libraries (matplotlib, plotly, etc.) are supported as well, but I'll be demonstrating with Holoviews plots.

A complete tutorial of plotting in Holoviews is beyond the scope of this learning aid. For this example, just know that hv.Scatter(dataframe, kdims='x_column', vdims='y_column') will produce a scatter plot. The documentation https://holoviews.org/getting_started/Introduction.html can be consulted for additional specifics. 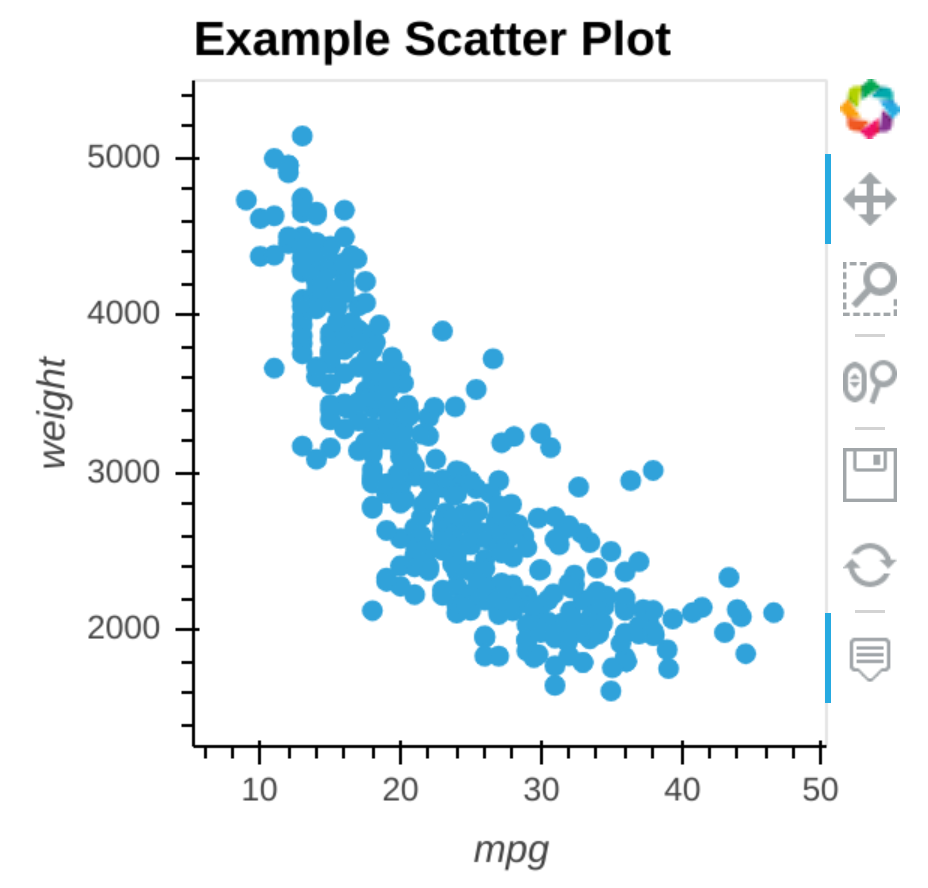 Let's make an app which toggles the axes of the plot. First we'll make the radio buttons to toggle the axis.

Now let's set up the layout of the plot.

Next, let's configure the plot to update when the widget values are changed. 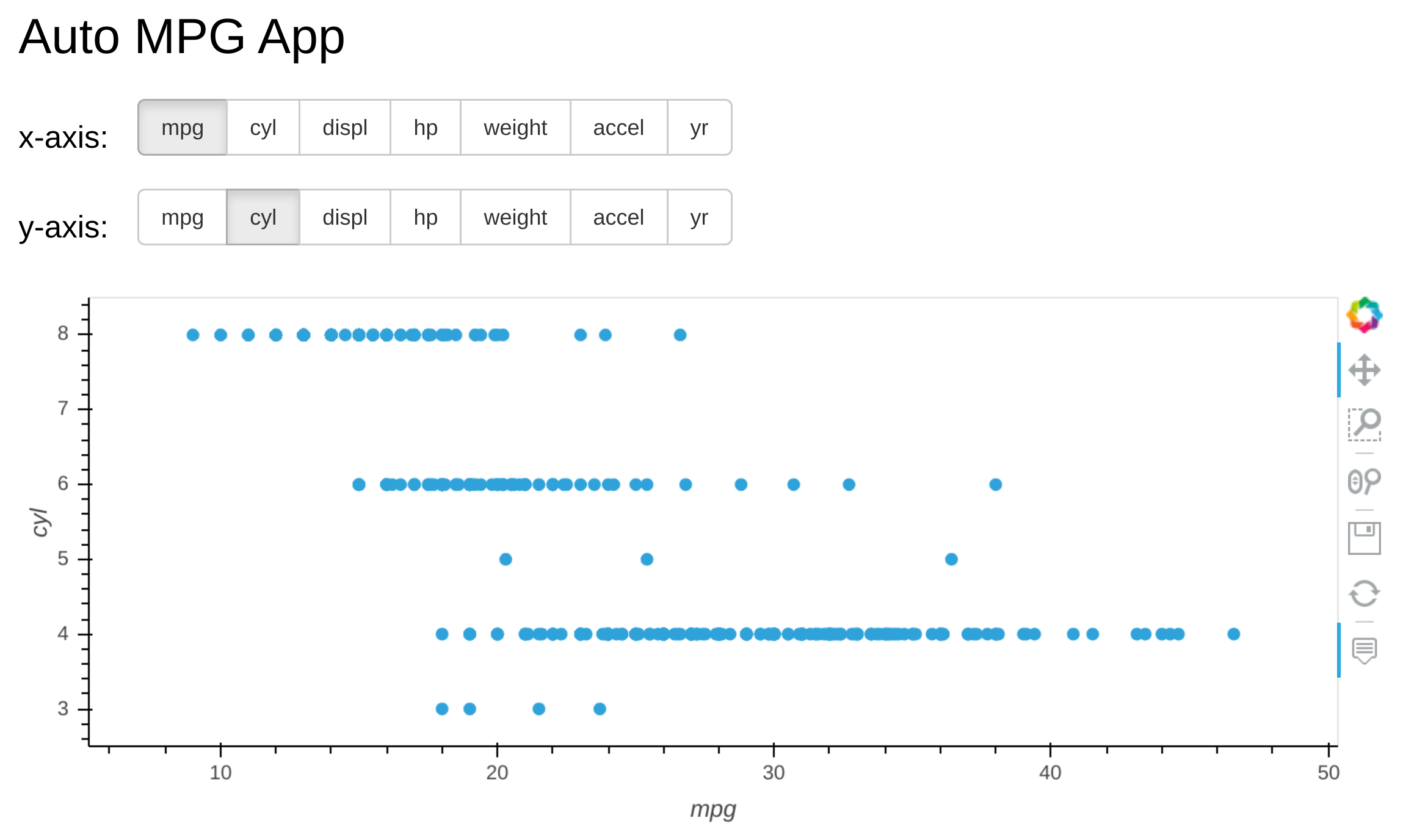 Be careful about running the above cell multiple times. Doing so will attach multiple function callbacks to the radio button, and the app may not behave as expected. Restarting the kernel, and rerunning the cells will fix this.

After you build an app, you'll want to deploy the app so others can view it. Deployment is beyond the scope of this learning aid, but the documentation https://panel.holoviz.org/user_guide/Server_Deployment.html covers a variety of deployment scenarios. MyBinder is useful for apps that are for demonstration purposes only. If you want to see how your app would look deployed by itself, then you can run app.show() in the notebook, and a new browser tab will open up with the app served on it. Run the cell below to see it in action.

Now that you have a simple app to start from, keep going and build your own!

If you liked this article, check out this Panel article as well!

More articles from our Library